The port of the United Arab Emirates

Dubai has three major ports for import and export. The Emirate lies exactly between Europe and Asia and is therefore very important for shipping. There are actually three ports: Port Rashid, Jebel Ali and Al Hamriya. Dubai Port (DP) World is the major operator of the ports with 49 terminals in use and another 9 in development. The company was founded in 2005 by the merger of Dubai Ports Authority and Dubai Ports International (which was established in 1999). 30,000 people work there. A majority of the company is owned by Dubai World. 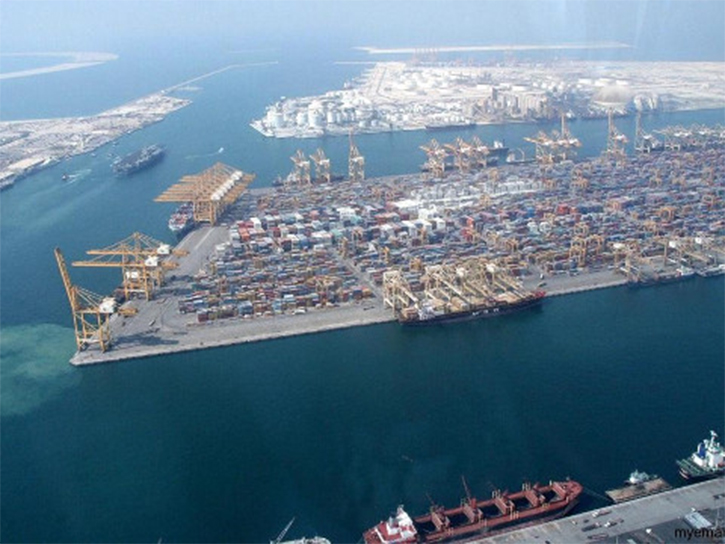 Jebel Ali is the world's largest artificial harbor and the largest port in the Middle East. More than five thousand companies from 120 countries of the world are located with 67 berths and an area of 134.68 square kilometers. Port Jebel Ali was built in the late 1970s to support the facilities at Port Rashid. Port Jebel Ali covers more than one million square meters of the container yard. It also includes space for the medium and long-term storage of general cargo, including seven Dutch halls with a total of nearly 19 thousand square meters and 12 covered warehouses. In addition, Port Jebel Ali also consists of 960 thousand square meters for open storage. Port Jebel Ali is located near to the highway and has a good connection to Dubai International Airport Cargo Village. The Cargo Village facilities can handle large quantities of cargo and can arrange transport from ship to aircraft in four hours. The commercial transport services transport containers and general cargo every day between Port Jebel Ali, Port Rashid and the rest of the UAE. Jebel Ali port is managed by the state and is owned by Dubai Ports World.

The port Port Rashid - also referred to as Mina Rashid - is a commercial port in Dubai. Named after Sheikh Rashid bin Saeed Al Maktoum, the gate was opened in 1972. At that time, the gate had only two gantry cranes and a capacity of less than 100,000 TEU. In 1978, the port was expanded to accommodate 35 berths (five of which can be used by the largest container ships at the time). Nowadays, the port (which has a depth of 13 meters) has 9 gantry cranes and a capacity of 1,500,000 TEU. Port Rashid offers berths for general cargo, RoRo and passenger ships. In the early 1980s, Port Rashid was complemented by the port of Jebel Ali which is further from the commercial center of Dubai, near the Abu Dhabi border. Port Rashid will change more and more into a cruise terminal.

Al Hamriya Port also known as Port Al Hamriya or Mina Al Hamriya is one of the smaller ports in Dubai, it is located in Deira, in front of the northeastern coast of the city. Al Hamriya Gate is bordered to the south by Al Waheda and Abu Hail and in the south and east by Al Mamzar. The Palm Deira, once completed, will form the northern edge of Al Hamriya Port. The route D 92 (Al Khaleej Road) runs roughly parallel to the site of Al Hamriya Port. In 1975 a $ 5.4 million contract with the Dubai government was set up to develop the Al Hamriya Port. This was partly a reaction to the increase in commercial activities in Dubai, which increased pressure on the Dubai Creek. The aim of the port was aimed at small fishing vessels, as well as part of the commercial ships destined for Dubai. Like all other ports in the city, Al Hamriya Port is now managed by Dubai Ports World. The port plays an important role in facilitating trade between Dubai and countries in South Asia and East Africa. Food, car parts and livestock cover most of the trade via the port.